The Ultimate Off Road Weapon

The Ultimate Off Road Weapon

Enduro racing is an ever-changing challenge—the terrain, the competition, the weather, the course. And you can’t be static in a changing environment if you want to prevail. That’s why we’ve given the class-leading Honda CRF450RX so many big changes this year. Basically, it gets all the same awesome upgrades as our CRF450R: new frame, cylinder head, hydraulic clutch, clutch internals, fuel injection, single-muffler exhaust, and more. Plus we’ve fine-tuned the suspension specifically for enduro riders, shaved approximately four pounds off last year’s bike, and even hooked you up with factory hand-guards. All in all, it’s the highest performing bike we’ve ever offered in the class. Embrace the changes—then embrace victory.

New Dual-Muffler Exhaust System - The CRF450RX’s dual exhaust system is compact and positioned closer and lower in the frame’s center to take weight off the rear end and bring more mass to the bike’s center for superior handling.

New Aluminum Frame - Our twin spar aluminum frame positions the rear shock’s mounting point low, opening up the airbox area and contributing to a lower center of gravity. The frame geometry also helps give you more traction, and that means more holeshots!

260mm Front Brake - The CRF450RX’s large front-brake disc measures a whopping 260mm. You get great brake feel and a wave pattern that cuts down on weight

Stopping for fuel in a race costs time. With the CRF450RX’s 2.2-gallon fuel tank, depending on the course and how much roost you’re making everyone else eat, it’s possible to make it through a three-hour enduro with just one fuel stop 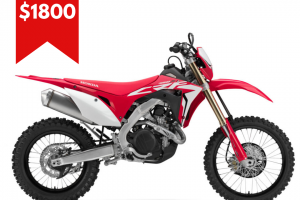